Background
The second stage of Germany’s assault on the Soviet Union (Operation Typhoon) and the drive to Moscow, began on October 2.

The early stages of the Operation took the Russians completely by surprise and within two weeks the combined assaults of the German 2nd, 3rd and 4th Panzer Armies had encircled a total of eight Soviet Armies.

Moscow's first line of defence had been shattered. The pocket yielded 663,000 Soviet prisoners, bringing the tally since the start of the invasion to three million Soviet soldiers captured. The Soviets had only 90,000 men and 150 tanks left for the defense of Moscow.

On 13 October the 3rd Panzer Army penetrated to within 90 miles of the capital. Almost from the beginning of Operation Typhoon the weather had deteriorated. Temperatures fell and the continual rainfall turned the unpaved road network into mud-bath steadily slowing the German advance to as little as 2 miles a day. The supply situation rapidly deteriorated and on 31 October the Germany Army High Command ordered a halt to Operation Typhoon while the armies were re-organized. 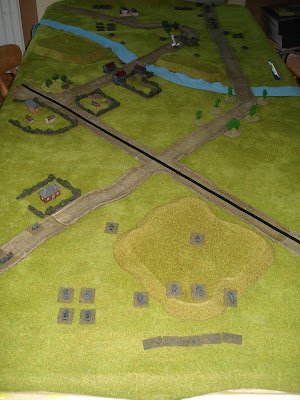 The scenario
Red Counter-assault on Route Gelbe is a scenario based on the fighting on Moscow’s doorstep as (not for the first time in history) Russian resistance stiffens in front of the capital.

Advance recce elements of 3rd Panzer Army have raced forward to a small Russian working farm and have secured one of two crossings over a major river tributary. As night falls on the 12th October, a Russian infantry battalion under the command of a motivated young Major (+1 CV) carries out a series of aggressive fighting patrols that isolate the German recce unit.

As dawn approaches on the 13th another counter assault by the Russians has caught 3rd Panzer Army off balance and whilst this attack is being dealt with a small armoured Kampfgruppe has been despatched to relieve the recce company and secure the bridgehead.

On their way to the battle the column has been ambushed resulting in the death of the German CO. His 2ic has taken command (-1 CV) but is inexperienced having just arrived at the front as a battle casualty replacement. Continual rainfall has reduced the road system to a quagmire (-1 Command to all armoured/transport units moving off-road).
Overnight the Russian Infantry Battalion has been reinforced by armoured support and two batteries of artillery. It is now a straightforward rush for the bridges.

Objectives
The game lasts for twelve turns and the objectives for both sides is to secure the river crossings for a counter attack.


Turns 1 & 2
In the early morning mist, the Russian infantry battalion deploys its support company in light woods and begins its advance on the German forward positions near the working farm bridge. Advance elements of the armoured support make some headway down the muddy road towards the second bridge.

The German Recce platoon calls in the support of a Stuka to break up the infantry assault and it is promptly shot down! The German relief column fans out from its entry point in the west but the muddy fields and roads severely hamper their progress.

Pre-registered smoke assets from the two Russian batteries mask both advance routes leaving the German forward positions blind. The Russian infantry battalion continues to make good progress, but the armour support stalls as it tries to make its way up the road.

The German column continues to make hard work of its advance with the horse drawn anti-tank platoon particularly struggling. 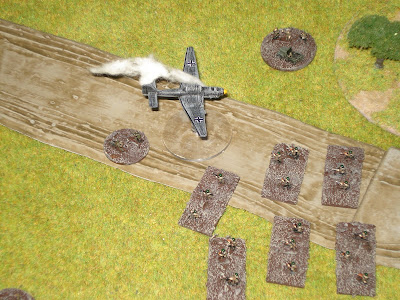 A Stuka bites the dust!

The initial probe across the bridge by the Russian infantry is met with a hail of fire and casualties are taken stalling the attack. The Russian armour fares no better again failing to make much progress down the road to the second bridge, however the Russian CO does manage to get his support company to the bridge along with an FAO.

The German relief column blunders twice – fortunately no enemy is in sight so the troops remain in position rather than charging headlong forward. The CO manages to finally deploy his anti-tank platoon at the cross roads/rail junction – not as far forward as he would have liked, but still better than failing to move at all.

Another pre-registered Russian HE strike on Hill 109 fails to cause casualties falling neatly between the armour and deployed infantry but the 152mm Battery fares much better being called down with devastating accuracy on the working farm suppressing all of its occupants. The Russian infantry press home this advantage racing over the bridge only to command blunder and fall back!

The German STUG platoon and supporting infantry in half tracks finally make the village and take up blocking positions on the road defending the working farm bridge. The Russian infantry battalion is now horribly exposed in the open. 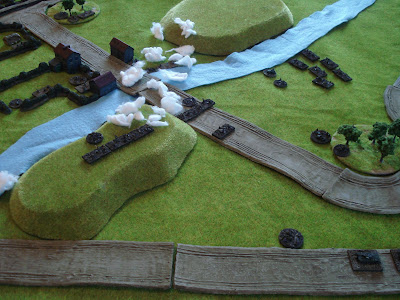 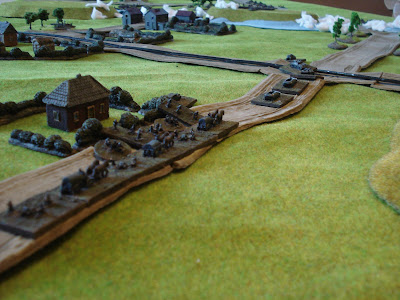 The German horse drawn Anti-tank platoon struggling in the mud

Turns 5&6
Further pre-registered artillery fire in support of the Russian armour falls on the cross roads/rail junction creating havoc within the ranks of the German anti-tank platoon. The Russian infantry Battalion, now holding onto the belt buckles of the German forward positions used massed firepower to suppress and knock out the vast majority of the defenders of the farm. Soviet armour finally makes the second road bridge and the remaining armour, way behind make good progress forward in support.

The German STUG platoon wreaks havoc amongst the Russian infantry again stalling their advance whilst other German units consolidate their positions to receive the Russian onslaught. The German commander is quite pleased with his deployment and begins to relax.

The Russian armoured columns attached FAO continues his good run of form accurately calling down fire on the cross roads/rail junction once again suppressing the vast majority of the anti-tank platoon.

The second T34 platoon changes its axis of advance moving towards the farm bridge in support of the Russian Infantry Battalion but fails to bring its guns in range of the STUG platoon.

Both sides settle down into a protracted long range fire duel and more casualties result. 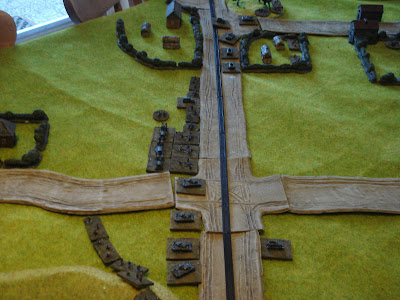 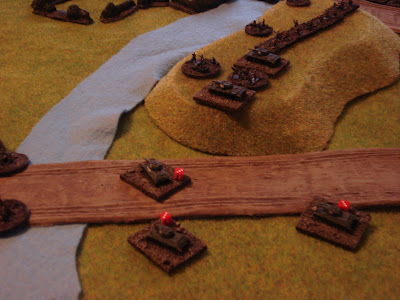 KV's and T34's engaging PzIII's and coming off second best 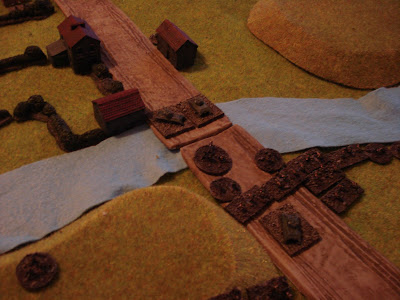 T34's join the Russian infantry assault at the farm bridge

Turns 7&8
For the first time in the game the Russian Artillery support fails to arrive. With evening approaching the Russian CO throws caution to the wind and orders a general assault.

Russian troops on both flanks crash forward completely catching the German player by surprise. Russian troops although largely suppressed and having taken casualties now have a foothold on the German side of the river.

The German PzIII company trades fire with the KV’s but at extreme range do little discernible damage. Pushing command to the limit, they once again blunder racing headlong at the KV’s bringing them into range of a T34 platoon and supporting infantry with Anti-tank rifles.

The action at both bridges intensifies with the Russian Infantry battalion taking a hammering. The Russian armour manages to check the advance of the PzIII’s leaving them dangerously exposed. Just as the Russian CO feels things moving in his favour the T34 platoon blunders and falls back along the road.

Things go no better at the farm bridge as the two lead T34’s brew up from combined STUG and anti-tank rifle rounds.

Turn 9
As dusk approaches the battle once again swings in the favour of the Russians. At the farm bridge weight of numbers begins to tell and the Russians consolidate the bridgehead taking the farm and outlying buildings. The STUG platoon and supporting infantry take casualties or end the turn suppressed and due to the tight nature of the terrain what remains of the German defenders cannot draw a clear line of fire.

The KV’s supported by infantry and four (yes four!) consecutive command rolls by the T34 platoon that only minutes ago retreated, leave the PzIII platoon shattered.

As night falls, the German commander has no effective weapon in range other than a solitary mortar with which to return fire.

Turn 10
In the darkness the Russian continue to pile on the pressure. By closing the range to within initiative distance small arms fire begins to take effect and some miraculous spotting by the FAO once again causes casualties amongst the remaining German forward positions around the village.

The Russian CO’s armour polishes off the final PzIII leaving the Germans without effective armoured support other than the STUGs.

The German CO, stunned by the ferocity of the Russian assault orders his men to hold hoping that morning will bring some supporting airpower and armour forward.

The Russian CO begins his plans for more aggressive fighting patrols in the hours of darkness! 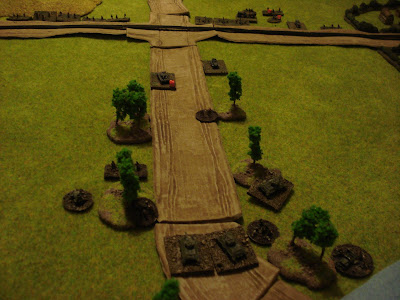 End game - Russians holding both bridges and Germans in a last defensive line minus armoured support. 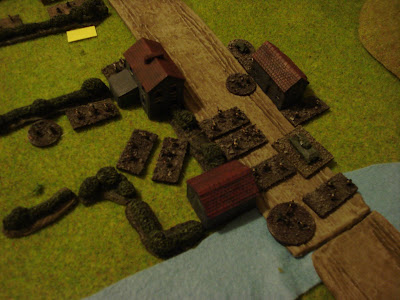