The once peaceful island of Saint Kidspring  has descended into darkness as rumours of a long forgotten myth about a portal to the underworld have once again risen.

Vampire Count Bartholomew of Salemere has sallied out with an Undead Army into the Kagronian Forests where the Pool of Ebon Night has been found by a mighty Orc Chieftain, Knabadug.

Knabadug is unaware of the importance of his find, but its is well known that he sees any incursion into Kagronia as an act of war and he has mustered a mighty warband to face Bartholomew's undead horde.

Count Bartholomew has spread his forces thin, desperate to locate the Pool not knowing that Knabadug's force has set up an encampment right on top of the portal itself.

In the furious battle that evolves, Bartholomew throws himself into the midst of the combat and initially puts the Orc forces under huge pressure as Knabadug struggles to beat off the Counts repeated assaults. The undead horde struggle to coordinate their attacks and finding his command increasingly isolated Bartholomew is forced to withdraw having exerted himself to the point of needing to escape and regenerate before rethinking his strategy.

Days after the battle, Knabadug learns of the myth of the pool and sets about building battlements to protect the site. He sends out emissaries to Arkan Ironhorn the Taurian Chieftain of Woll Subterrane and Kusserg Caskbeard the Dwarven Clan Leader of the Jukalp Heights.

Back in Salemere Castle, Count Batholomew has summoned a local Undead Warlord Firian Delacroix of the Order of Obsidian Mausoleum.
Posted by Road Trip 2018 at 04:14 No comments:

This is my second Taurian Army for Warband. A Renegade Taurian with a couple of units of leaderless Mercenary Taurians; outcasts from their individual herds, drawn to the prospect of loot and pillage....

This Warband will run Shaman-less and will be supported by random mythical beasts including a Crash of Rhino's, a Blessing of Unicorn Unicorn or a Pegasoi. 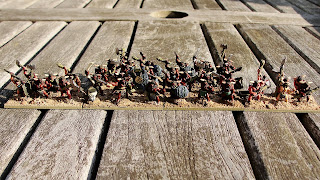 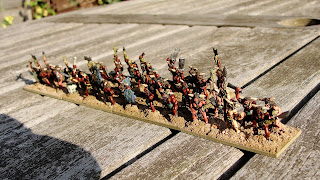 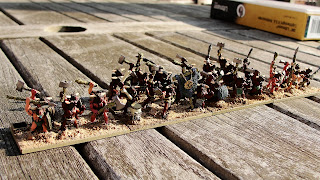 Rainy day and a spare hour on my hands, plus some 100x50 MDF bases and I've come up with my very first bit of scratch built terrain. 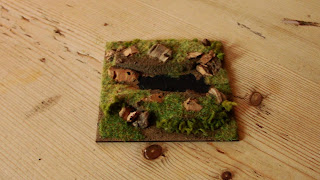 I set out with attempting to create a Crevice to use as impassable terrain for Warband. What I have ended up with I'm not entirely sure, but I guess it could be a crevice...

Then again, it could be a Rock Pool/Mini Lake of either limiting or impassable terrain!

This is two MDF 100x50 Warband Bases, some shavings from a piece of railway bark modelling and a small strip of foam from my redundant stethoscope packaging cut up to make the banks. I finished off the terrain with clump foliage and scatter grass.
Posted by Road Trip 2018 at 06:11 No comments:

Here's a 'test' stand for my Uruk Hai White Hand of Saruman inspired Goblin Army for warband. Excuse the bases as these are not yet tidied up as I wanted to experiment with the scheme before committing to the theme.

Quite pleased with the result, but not entirely sure about the flesh tone done in GW Scab Red? 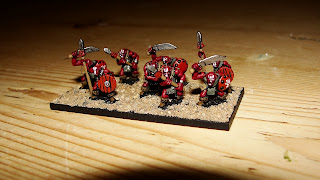 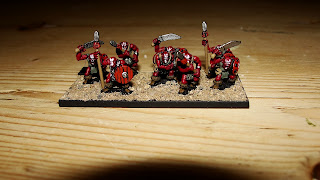 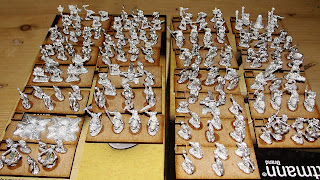 Army on the left includes A Chieftain, five units of warriors, a Giant/Troll unit, one unit of Wolfriders, 2 archer units, a Giant Spider unit, a Giant Crossbow and a Boltshooter unit.

The army on the right has a Chieftain and Shaman, four units of shieldwall warriors, a giant/troll unit, two units of wolfriders, 2 archer units, a giant crossbow and a boltshooter unit.
Posted by Road Trip 2018 at 04:00 No comments:

Not bad. Just over a month from bag to table for three Warband Armies.

Taurian. I went for a summer-ish scheme to the basing in the end with a 50-50 mix of Dead and Herb Grass and some dotted clump foliage complete with the odd spec of flowers. 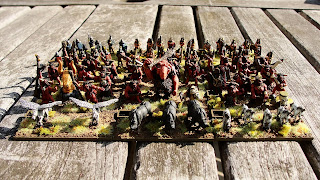 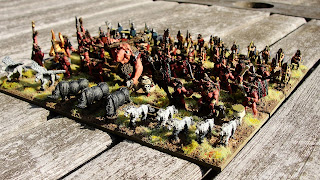 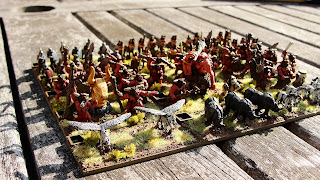 The Beasties (and some of the Centaur Units) will be used with this Taurain Army and a second Taurian Warband I am going to be working on with a 'darker' theme, using darker flesh tones and colours to give them a feel of being a rogue Taurian Warband.

The Undead Lord Warband with attached Necromancer and supporting Warriors 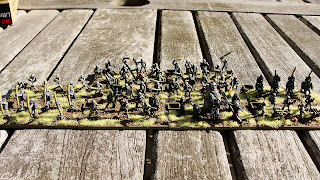 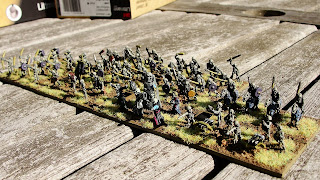 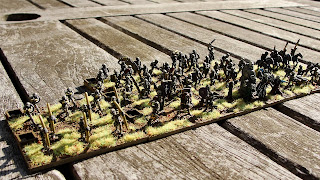 I still have a Catapult and Chariot Unit to add to this army. In terms of unifying the force, I chose a flat purple for shields and I kept the basing simple using the same 50/50 mix of herb and dead grass, however I left off the clump foliage and flowers to give these units more of a plaguelands feel. 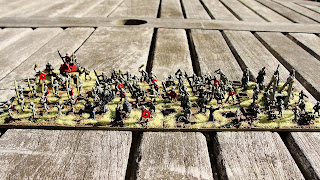 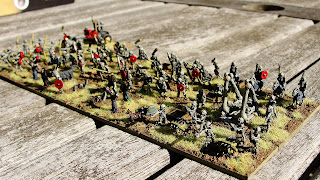 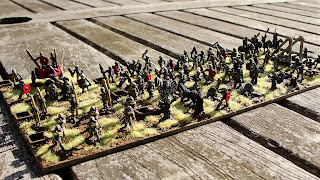 I went for a classic Vampire feel painting shields in blood red to unify the force.

Finally, here are the undead Beasties including Zombie's, Wraiths, Ghouls, Bat Swarm and a Giant Vulture. I tried to keep these generic enough to be used across either of the undead armies. 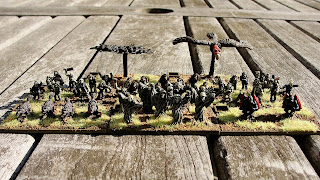 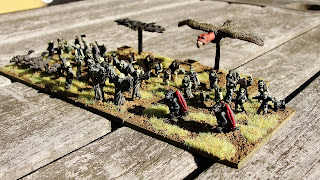 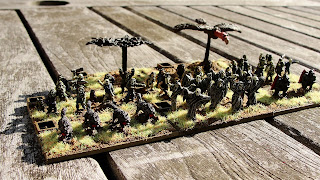