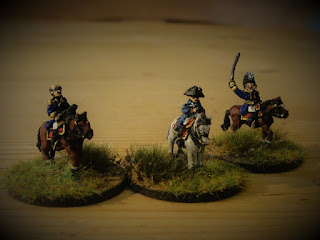 Also finally got around to finishing off some spare French Medium Artillery and made a bit of a dent in my Bavarian Division by completing the artillery - sadly no photos of either at this stage.
Posted by Road Trip 2018 at 06:23 No comments:

As the sun begins to set on day one a Spanish Guerilla ambush is launched against French Column B causing panic amongst the French ranks. Significant casualties are caused as the Guerilla head back into the foothills.

On Day 2 cautious moves by both sides leave advance columns facing off across the river North of Astacia. 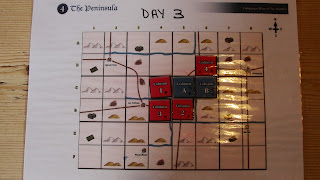 As daybreak arrives the French seize the opportunity to declare battle and fix the battlefield as C4-C6 and D4-D6. 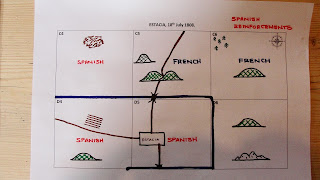 Units of both sides march on the battlefield, however the outnumbered French concede the loss of their Victory Point gains made on Days 1 & 2. As battle is joined the French hold Iglesia Roja for 1 VP, whilst the Spanish Cavalry Column marches North through Arbrancia and then West into Los Escombros cutting the French lines of supply and securing a massive 6 VPs.

Only by defeating the Spanish by nightfall can the French win the campaign. Left with little choice, General Dupont takes an aggressive stance, ordering I & III Corps to attack West towards C4. II & IV Corps are ordered to support the attack in the West leaving a small reserve to hinder the Spanish reinforcements arriving later in the day at C6. II & IV Corps will also aim to hold off the Spanish attempting to cross the river in support of their forces in C4.

Recognising their superiority in numbers and in VP's and with the benefit of being able to see the French deployment, the Spanish choose a less aggressive approach. Ballesteros orders II & III Corps to press forward toward the river bank whilst I Corps hug the same bank forming two sides of a holding box. The aim of the Spanish is to hold until the arrival of the Cavalry Corps and if an opportunity presents itself to take a more aggressive approach by crossing the river to engage the lead French columns. The Cavalry Corps is to make haste to the battlefield and harass the rear of the French.
Posted by Road Trip 2018 at 06:56 No comments:

The last (at least for now...) of my French Cavalry - Two units of Dragoons 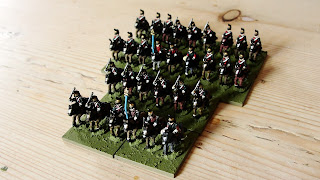 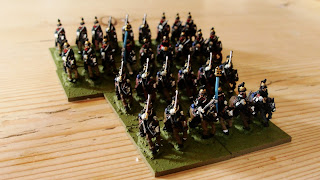 At the end of Campaign Day 1 the Spanish have made bold advances securing Morronoso (F3), Estacia (D5) and Bemol (D8) for a total of 3 Victory Points.

The French, outnumbered have advanced much more cautiously. French Columns have secured Iglesia Roja (B2) and a key road junction in Los Escombros (B6) for a total of 2 Victory Points.

Two other French Columns have been held back in reserve, presumably waiting to see from where the main Spanish thrust develops.

As the sun begins to set a Spanish Guerilla ambush is launched against French Column B.... 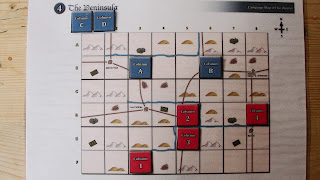 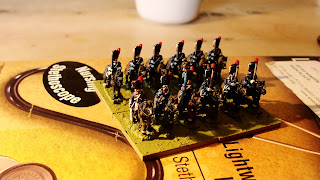 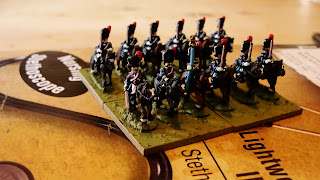 A Blucher-Scharnhorst Campaign in the Peninsula

Pendraken Forum http://www.pendrakenforum.co.uk/ members Nosher and T13a are getting together to fight a second 'virtual' Napoleonic Campaign set in the Peninsula.

The campaign is inspired by and courtesy of http://www.peninsularwar.org/bailen.htm

I am aiming to use my blog to follow the campaign and resulting battle as it develops over the coming weeks.

Putting down the Andalusian Revolt - July 1808

As part of Napoleon's plan to subjugate Spain in 1808, Dupont was sent into Andalucia with 13,000 troops to take Cordoba and Sevilla. Dupont had few veteran troops and as such has been seen as as a force wholly inadequate for undertaking such an important expedition.

Dupont reached Andujar in mid-June to find Andalucia in a state of revolt. Pressing on to Sevilla, his troops ravaged Cordoba despite having taken it virtually unopposed. By this time Spanish insurgents had succeeded in cutting Dupont's lines of supply back to Madrid at the Despenaperros Pass which prompted Dupont to order an immediate withdrawal back to Andujar.

He stayed at Andujar largely inactive for almost a month - time which afforded the Spanish General Castanos to make good use of assembling a 34,000 strong Army of Andalucia.

The French forces under Dupont are outnumbered despite receiving reinforcements of 5,000 men. Undersetimating the Spanish capability, Dupont pressed forward intending to hold a line along the River Guadalquiver.

The campaign is fought over Map 4, the Peninsula map with the French defending A1-A8 and the Spanish attacking from F1-F8. The towns of Estacia and Arbrancia are in fact villages and are only worth 1VP each. 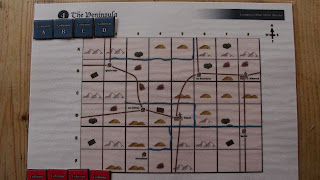