Foreword
In the final dark days of the siege of Pa-Mai, principal city of Woll Subterrane, Kragonian undermining efforts have been rewarded as the outer walls are finally breached. Knabadug of Kragonia finally feels a sense of the end of Taurian rule and more importantly revenge for the death of his Son Grablog the Anvil. As he outlines his plan of assault to his allied commander from the Yhn Enclave a messenger arrives with news of a visitor whom he insists his Lord will be intrigued to receive council.

Aranarun Stormhoof enters the Command Tent and with aplomb declares his intent of an alliance and an Army willing to fight to overthrow unjust Taurian rule that has seen his people homeless and forced into a life of exile in the Timberlands. Knabadug is all to keen to have his numbers swelled as he realises that despite a significant numerical advantage his forces will be hard pressed to take the city.

"If I were to agree to the alliance you suggest, might I ask what your price is?" enquires the Orc Chieftain. Without pause Stormhoof announces that his price is "The Crown of Woll-Subterrane with the guarantee of a non-aggression pact and cooperative trading agreement between the Kingdoms of both parties." Knabadug mulls this over for a good while, pours two large flagons of ale handing one to the Taurian. "You can forget your non-aggression pact Taurian. I won't lie. I wan't your support, however not just for the forthcoming battle but for the future. Will you yield to becoming a vassal state of Kragonia?" Stormhoof is desperately aware that he came to Knabadug empty handed and is damned if he will leave with nothing. "I accept your terms. Now when do we fight!"

Windrider wastes no time in sending word to Sarlea that the wheels of their plan is now set in motion. He ends his short note with: "By nightfall tomorrow my love, we will be seated as King and Queen."

The Battle
Pa-Mai sits atop a steep hill with only the valley leading to the city walls accessible to assault by a besieging army. Its ancient walls are metres thick, however the city gates are the formidable fortresses weak spot. Set in the valley floor, the gates are overlooked by a significant mound once used as the burial grounds for Taurian Nobility.

Unsurprisingly the allied army of Kagronia and the Yhn Enclave have chosen this exact spot and having hemmed in the Taurian's immediately set to work with under-mining work realising that their siege weaponry wasn't up to the task of breaching such walls.

Only a day ago a mighty explosion wracked the city and a significant breach developed alongside the city Gatehouse. To make matters worse the gate guards have reported the arrival of a small but highly mobile Renegade Taurian force which appears to have settled outside the city walls. The renegades have been heard singing ancient Taurian chants to war-gods which can only mean they are allied with the Orcs. It isn't long before the Renegades banner is recognised as being that of Stormhoof of the Timberlands.

What little food remains within the city walls has been gathered and on the eve of battle, Ironhorn addresses his army.

"Rest in the peace that our womenfolk and kin are safe - spirited away through our subterranean mazes. We that remain face our greatest ever struggle tomorrow, one that expect for many of us may well be our last tomorrow. It is with a heavy heart that I ask each of you to lay down your life for your kin, your country and your King. Pa-Mai may fall but be in no doubt that stories of our courage will resound forever! Tonight I will lift prayer to Uthar, God of Hope but fear not if our prayers are unheard, for tomorrow night we dine in death may we dine with Opdros, God of Justice. We will be avenged!!"

The besieging army is equipped with a covered battering ram, two siege towers and assault ladders for 6 units. There are also a range of mantlets and fieldworks protecting the archers and other missile troops.

The missile troops will sweep the ramparts of enemy archers whilst Yhn's Enclave and the Taurians will attack the city walls. Knabadug's Warband will assault the gatehouse and breach.

The Deal of Darkness

In the Timberland's a mighty feast is being consumed in celebratory anticipation of the impending fall of the Taurian powerhouse of Pa-Mai. Throughout the feast Viho Windrider, seated on his new paymasters right hand side, has been plied with the finest wines.

Attention to Windrider of a very different kind has also been noticed by Stormhoof who, keen to attend to the every need of his new Aide de Camp, suggests that the main guests should retire to the chambers. All evening Sarlea, Concubine to Stormhoof has never been far from the handsome Viho.

As more food is consumed and the wine continues to flow freely, Aranarun suggests to Viho that he may wish to partake of his concubine's desires, a suggestion to which Viho is most agreeable to given the dark beauty before him.

After hours of passionate but somehow raw and rapacious lovemaking, small talk within the warmth of the pillows turns to events in Woll Subterrane and Stormhoof's ambitions to be King of the Taurian's. In machiavellian tones, Sarlea skilled in the art of weaving a web of intrigue, seems to deflect Windriders searching whilst still encouraging him to delve deeper.

Speaking in hushed tones, she tells of a life of unhappiness; a life of wanting to be Stormhoof's one passion and someday his Queen, and her frustration in being a mere concubine. She sobs as she speaks of mothering children to a Warrior King, the future Princes and one day Kings of new and mighty Taurian Kingdom. She tells how Stormhoof hopes to become that King when Pa-Mai falls but how, despite his popularity his Warparty is really leaderless, only bound by greed and the promise of rape, pillage and ale..... She goes on that unbeknown to Stormhoof only she can bring about a unification of the leaderless rabble.

Intrigued but almost jokingly, Windrider asks how a mere concubine is capable of achieving such a coup. Sarlea confides that she has learnt the Shamanistic Rituals and is capable of creating a spectacular Glamouring Maze that any Taurian noble would be only too happy to be the owner of. Before his very eyes the Succubus of Salemere weaves a spectacular ritualistic spell which gazes into the future - a future showing a handsome, virulent and powerful Taurian being crowned as King. Not only does the future show Viho as King it also shows several sons proficient in sword, mace, axe and shield.

Spellbound, the Taurian asks if this future is fact or fiction. Sarlea's response is succinct. "Together we can rule. Alone we are nothing more than lovers".

As morning approaches and still under the spell of the Succubus's beauty and artful prose, Sarlea outlines the steps to achieving Kingship.

Stormhoof's Warparty must take part in the impending siege and final battle at Pa-Mai. Centaur Knights loyal to Sarlea will ensure that Stormhoof ends the battle as a posthumous hero. Leaderless, the Warparty will need a new hero and who better than Viho the new 'Captain of Clonell'.

Windrider true to his Bounty Hunter roots becomes giddy with the thought of riches beyond belief and to boot a Kingdom and a beautiful Queen. The deal of darkness is sealed.
Posted by Road Trip 2018 at 11:53 No comments:

In the aftermath of the great battle at Alder Covert Maze, Knabadug of Kragonia poured every resource available into the region, his forces pursuing and harrying the defeated Taurian Army all the way to the gates of Pa-Mai.

The battered remnants of the Goblin Horde from the Yhn Enclave were able to regroup and although leaderless following Henk's capture they join in the pursuit.

Alder Covert Maze lies in ruins and the Omniel Monument is desecrated - used as an executioners block for Taurian and Centaur soldiers left wounded on the battlefield.

In Salemere Count Bartholmew is pleased to see his plans coming to fruition. The Kragonian's are suitably distracted in their pursuit of total annihilation of the Taurian Kingdom, the Goblins have been drawn into the struggle and the Renegades of the Timberlands, although swelling in numbers are for the moment neutralised. In the months that conflict has raged, the ranks of the obsidian Mausoleum have grown as the dark magic of Necromancy goes about its evil.

Viho Windrider the Taurian Bounty Hunter who has uncovered Aranarun Stormhoof's deception which led to the wars is left in a quandary. Pai-Mai will fall and with it will fall millennia of Taurian Kingship. Even if Windrider could make it safely to Pa-Mai to share the news it is likely to make little difference to the final outcome. The Bounty Hunter makes the tough decision to bide his time and look to use the information when a better opportunity presents itself.


Windriders arrival in the Timberlands has not gone un-noticed and a concubine of Aranarun, one of the few humans left in the Five Kingdoms and also once the daughter of a handsome young Captain in the Salemere Guard has drawn the eye of the Bounty Hunter. Suspicious of his intentions, she determines to use her female guile and beauty to oust his purpose and intent.
Posted by Road Trip 2018 at 00:54 No comments:

After their disastrous debut at the Battle of Alder Cove Maze, Henk's Warband from the Yhn Enclave finally get some warpaint.

I've gone for a more traditional Goblin scheme with this army. A four colour palette of Goblin Green, Scarlet, Mahogany Brown and Middlestone.

I'm undecided whether to add a little warpaint to the faces - thinking a vibrant blue??

I'm also not that keen on the Skeletal face masks. If I had the spare figures I would probably have left these off the stand altogether. Not my favourite sculpts at all.

Scroll down for the latest reinforcements! 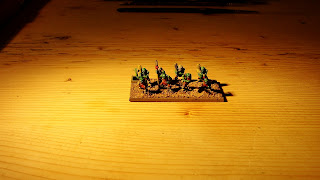 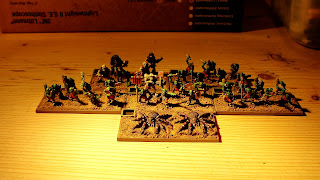 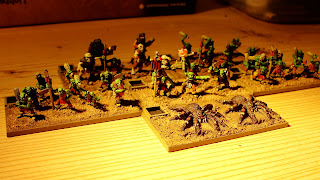 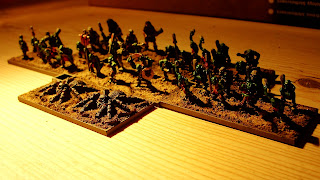