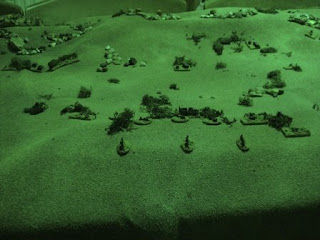 3Para Plan of Attack
With the battle taking place at night and in poor weather 3 Para's CO decided that the main thrust of the assault would be against the right flank. B Company would lead the assault in a flanking manouvre intended to 'roll up the flanks' of the Argentinian positions.

A Coy would support this attack whilst HQ Company under the CO would feint an attack against the centre left positions with the intent of pinning the enemy in the centre. Support company would offer fire support from the startline.

Having the advantage of Hidden Deployment and gaining a further 5 hidden deployment markers, the British would seek to threaten the left flank with the blank markers hopefully preventing the Argentinian Commander from re-deploying any troops to strengthen the actual point of attack until it was too late.

RI7 Plan of Defence
Major C. Carrizo-Salvadores strung out his forces across the expanse of Longdon placing his HQ's and IR equipped HMG and Sniper along likely routes of attack.

His Marine detachment under MSL S. Dachary took up positions on the most exposed left flank. A single hidden minefield covered a gully in defilade leading to the central summit of Longdon.

Turns 1-3
The Para patrols located the Argentinian Marines calling in HMS Avengers guns - only for it to blunder. Fortunately for the Paras the fire deviated massively off the table narrowly missing B Coy's startline.

The advance elements of B Coy came within 200 metres of the Argentinian Marines before being detected, a hail of fire checking their advance. Other hidden routes of advance went largely unchecked. Were the enemy asleep?

The Argentinian CO watched in horror as hidden deployment markers moved behind his line of defences dangerously exposing his right flank. A runner was despatched to rouse the Reservists.

The advance elements of B Coy failed their command roll leaving themselves dangerously exposed in the open and the ensuing firefight sees them suppressed again. Some frighteningly accurate artillery support ties up other units of B Coy stalling the Paras assault.

In the centre the Argentinian CO wisely checks his fire allowing A Coy to come within effective range of the weapons massed on Longdon's summit.

The Paras continue to creep forward bringing their Charlie G's into play not realising that almost their entire battlegroup has now been detected. Suddenly all hell breaks loose resulting in the first British casulaties to B Coy. The Para Recce patrols desperately try to relocate to the centre aspect of the battlefiled but find the terrain pretty tough going.

Just when it is feared that things cant get much worse the Naval FAO wanders into the hidden minefield - narrowly avoiding destruction. 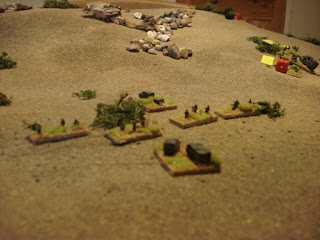 Turns 4 & 5
With casualties starting to mount 3Para upped the anti throwing the Support Company into the fray. Milan, GPMG and Mortar fire raked the Argentinian positions in the centre with further support added from HMS Avenger and 29 CDO's 105mm Field Howitzers.

The Argentinian Marines supported by the 81mm mortar platoon continued to increase the pressure on B Coy once again stalling their assault with mounting casualties.

3Para's support company continued to pour down covering fire and A Coy's support passing through B Coy proved timely. With the vast majority of his troops pinned down by enemy fire the Argentinian CO was powerless to respond. An entire turn passed with only sporadic fire being returned towards A & B Companys combined assault. 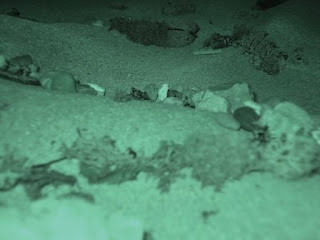 Turn 6
The combined assault of 3Para A & B Company finally breaks into the Argentinian Marine position from the flank and rear and in a brutal round of hand to hand clear the trenches.

With daylight approaching and under pressure from 3Para Support Company Maj Carrizo-Salvadores orders his men to retreat on Stanley.