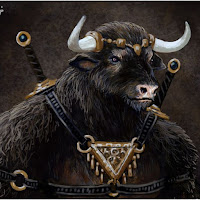 Aranarun Stormhoof is a cast-out from the minotaur Clans of Clonells Timberland. Keen to make a name for himself, he leads a renegade minotaur warparty drawn from a multitude of leaderless minotaur clans. On the island, the warparty has become renowned for cattle raids and petty criminal activities in the wilderness.


Stormhoof's reputation has earned him as many enemies as admirers, particularly in the Orc and Goblin communities, many of whom live to create chaos. Keen to make an alliance, Knabadug grants Stormhoof council and they meet to discuss terms.

The renegade minotaur confides in the Orc Chieftain outlining a deception plan Count Bartholomew approached him about days earlier. Knabadug is furious to learn that Arkan Ironhorn's Shaman, Sinaris Tesbin is in league with the Count and is marching on Kagronia as part of a diversionary attack hoping to draw away Knabadug's forces so that the Count can once again try to capture the Pool of Ebon Night. Ironhorn's Warband is approaching Kagronia through the Vile Plains.

Knabadug sends for his first son, a capable but somewhat headstrong young Orc Captain by the name of Grablog. The young Orc Captain is to ride out to the Vile Plains and set an ambush for Ironhorn. Knabadug's orders are simple; "Destroy the invading army. Failure is not an option. There will be no retreat. Bring back Ironhorn's head or return on your shield!"

In a vile deception, Aranarun has already been bought and is in league with the Undead. No sooner is he outside the stronghold gates before he sends a messenger to Count Bartholmew - "The trap is set my Lord..." 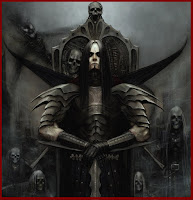 At Salemere Castle, the messenger conveys the news from Kagronia. The war is about to be widened, chaos will descend, and the Armies of the Undead will have new flesh on which to feed. The Pool of Ebon Night will be opened unleashing the hell of the underworld, but for now it's capture can wait. Stormhoof's men masquerading as Ironhorn's army will draw attention away from the new alliance being drafted with the Undead Hordes of the Obsidian Mausoleum.
Posted by Road Trip 2018 at 04:21